Warning: The following post features ferocious meat lovers. If you are tender, juicy, or have a tendency to hop, they might eat you. Read at your own risk. 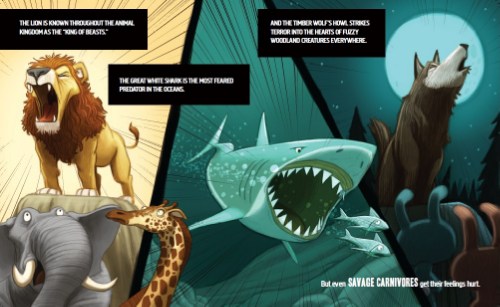 The Lion is King of the Jungle!

The Great White Shark is Sovereign of the Sea!

The Timber Wolf is Emperor of the Forest!

who goes by the name of Aaron Reynolds

PRINCE OF THE PICTURE BOOK!!

You want proof of the Princely Pudding? Ravenous readers everywhere are gleefully clicking their cuspids and savagely devouring Aaron’s brand new book, Carnivores. Yes, they’re eating it up before it eats them. 🙂

A wise and sensible thing to do, I daresay, because this hilarious story is totally brilliant, darkly delicious, and oh-so-filling. *burp*

It wasn’t enough that back in 2005, Aaron spiced up my ho-hum existence with Chicks and Salsa. No. He got me to wiggle my wattle and actually tolerate football with Buffalo Wings in 2007. Did he stop there? Not a chance. 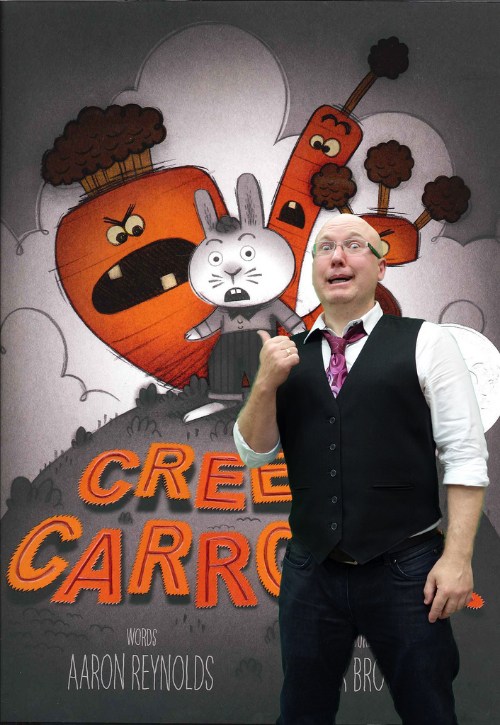 Last year he terrified me with a bunch of Creepy Carrots, but I’ve since forgiven him because at least now I know the chopped salad I’ve been smelling under my pillow is real.

In Carnivores, an irreverent, toothsome tale championing self acceptance, we see that life at the top of the food chain isn’t always hunky dory. Poor Lion, Great White Shark and Timber Wolf — everyone fears, misunderstands, and shuns them. Do these bloodthirsty diners really deserve all that bad rap? What happens when they go vegetarian, don disguises, consult a wise old owl?

I simply had to invite Aaron over to Alphabet Soup to get to the meat of the matter. The man has eaten quite a platter of animal flesh in his time and I hear he cooks most of the meals at home. A book-writing chef? I’ll take mine medium rare . . . 🙂 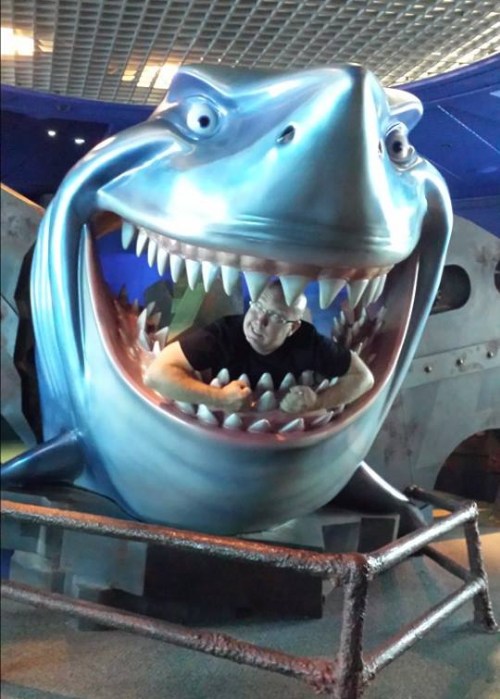 I just have to ask. What prompts a former vegetarian to write a book about carnivores? Have any plant eaters ever been cruel to you?

It’s true, I was once veggie-ivorous. But these days I’m 100% meat-eater. It was a Burger King whopper that did me in. Shh…don’t tell.

No planter eaters were ever cruel, but I’ve had plenty of people try to get me to be less than myself over the years. I’ve always had big ideas for life and had folks telling me to think smaller, simpler, less creative, etc. That was the original idea for the book. Can you be less than all you were meant to be just so others will feel more comfortable? In my case, the answer was nope. In the case of lions, wolves and sharks…also nope. 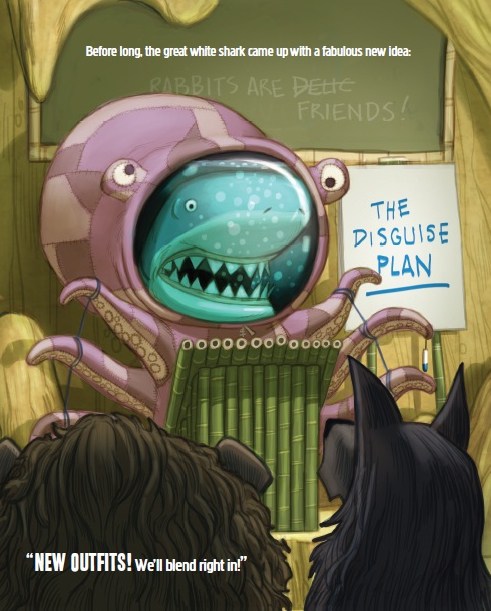 How did you get to eat all those exotic meats listed in your author bio? Which did you like most? Did any of them bite back?

I’ve had the good fortune of getting to travel to a lot of different  countries, and being a lover of all things edible, travel and culture is all about the food. I’ll try anything once. I’ve had octopus in Japan, kangaroo in Australia, goat in Guatemala and haggis in Britain. My favorite though was these teeny little hard-boiled quail eggs that I had in Brazil. You could pop them into your mouth like M&Ms. My mouth is watering just thinking about them. 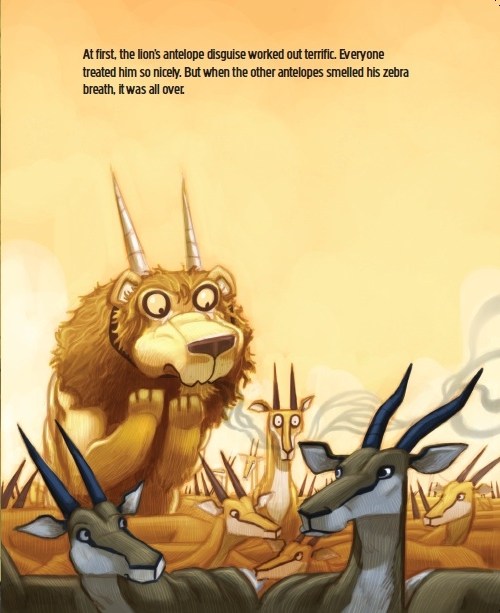 Which of the three main characters in Carnivores are you most afraid of? Which one is most like you? Would you actually eat any of them (or have you already)?

I was pretty traumatized by “Jaws” as a child, so I’m very afraid of sharks whenever I’m in the ocean. Oddly enough, that’s the carnivore from the book that I’ve eaten. Grilled shark is a little bite of heaven.

I would say I’m most like the lion…his ideal day is to sleep for sixteen hours and eat the rest of the time. Purrrfect.

What was your reaction when you first saw Dan Santat’s illustrations? What do you like most about how he interpreted your story?

Dan has this amazing visual storytelling ability that takes a book so much further than the original story. There’s a purely visual joke, subtle and hilarious, on the last page of the book…that’s pure Santat. He’s also a master of facial expressions, so his characters’ faces are full of subtext and double meaning. It’s a real treat to have a guy like Dan grab your story, interpret it through his awesome and weird imagination, and run with it. I hope this won’t be the last book on which Dan and I collaborate. 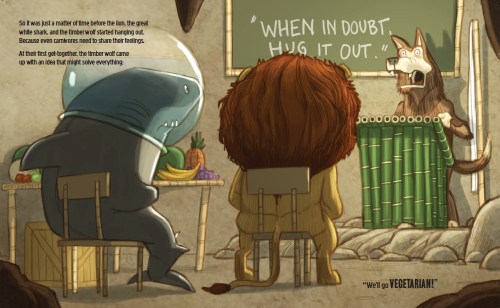 Chicks and Salsa, Buffalo Wings, Creepy Carrots!, and now Carnivores – what compels you to write about food? How did your experiences working as a waiter and chef inform these stories?

It’s not conscious, but you’re right. I write about food a lot!

I’m deeply inspired by and passionate about food. I was a waiter in my teens and early 20s and I was always watching the chefs work when I had a moment to spare. It inspired me to go to culinary school myself, to learn all I could of the technique and craft behind making extraordinary food. If writing opportunities and a passion for storytelling hadn’t lured me away from that life, I would definitely be a chef right now.

It’s a blast for me when those two great passions converge in a book like CARNIVORES. 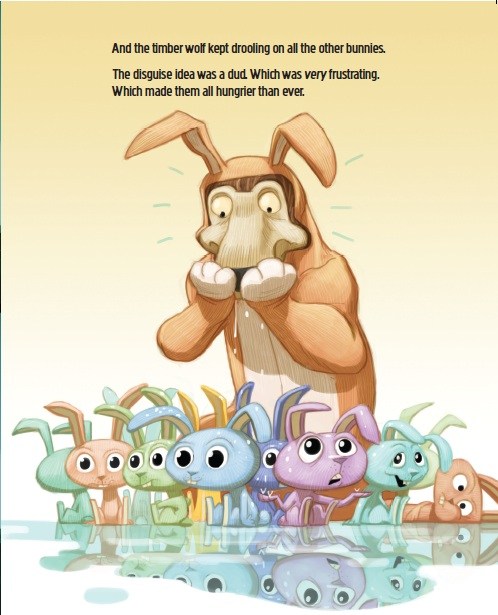 Are you naturally funny? Are you funnier as a vegetarian or as a carnivore? What foods should us grumpy people eat to stimulate our funny bones?

I think I’m HILARIOUS…though my kids would sometimes disagree. I was the worst vegetarian in the world…I didn’t really love vegetables, so I pretty much just ate cheese pizza. So I was more uptight and frustrated as a veggie. I definitely think I’m a funnier carnivore.

Put a fried egg on anything and it’s both funnier and more delicious. 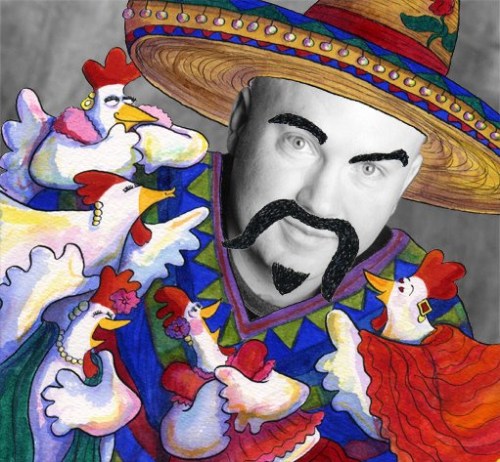 Please describe in mouthwatering detail the best meal you’ve ever eaten in a restaurant.

Best meal ever – I went to a true Churrascaria (Brazailian steak house) in Brazil. They have these in America now, but nothing like this one. The waiters wander with these huge skewers of meat and you have a little red light/green light thingy on your table. Green means “bring on the food!” and the waiters rush the table and start carving meat right onto your plate. The meat was endless. Brazilian cows have humps on their backs and the taste of the hump steak (though “hump steak” sounds hilarious) is out of this world. Juicy, melt in your mouth delicious.

What is your favorite meat? How do you like to cook it?

I have two that are very different. Beef, especially ribeye. And (don’t laugh)…snails. I know people get ooked out by snails, but I LOVE snails! Garlic snails with angel hair and pecorino! *drool*

I don’t usually use recipes when I cook, but my favorite preparation for ribeye roast is to simply coat it with kosher salt, garlic, black pepper, and olive oil and put in on the grill. Sear it on high until you have a nice crust and then put it on low for about six hours. The result will make you pass out.

What’s next for you? Will we be licking the pages of another book about Rooster at Nuthatcher Farm (yes, please)?

No current plans for further adventures at Nuthatcher Farm, but who knows what the future holds!

My next book after CARNIVORES is called HERE COMES DESTRUCTOSAURUS. It’s about a terrible giant lizard ravaging New York City, but not for the reasons you might think. It comes out Spring of 2014.

Thanks so much, Aaron!! 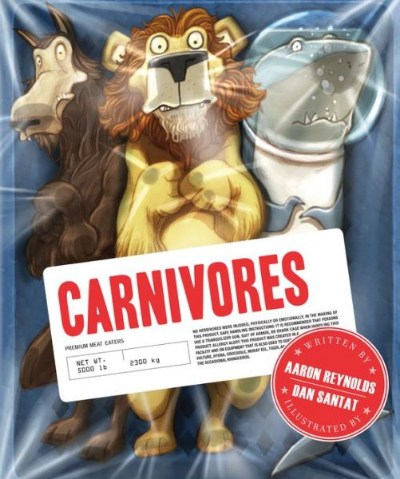 17 thoughts on “the meat of the matter: aaron reynolds on carnivores”