Many nights
we would go to bed
without eating

I first became acquainted with Jorge Argueta’s work through his delectable cooking poem books (Sopa de frijoles/Bean Soup, Arroz con leche/Rice Pudding, Guacamole, Tamalitos, Salsa). Of course it felt like he had written these books just for me — how could I resist the playful language, mouthwatering imagery, and charming magical realism? Each poem, a spirited, sensory feast with a lasting, distinctive flavor, made me hunger for more.

Two years ago, I discovered another dimension of Jorge’s brilliance when he wrote about the heart-wrenching plight of Central American migrant families in Somos como las nubes/We Are Like the Clouds (Groundwood Books, 2016). Winner of the 2017 Lee Bennett Hopkins Poetry Award, these poems express the child immigrant’s point of view and show how an arduous journey marked by danger and uncertainty is also a testament to courage, hope, resilience, and optimism.

Though I knew of Jorge’s very first poetry picture book, A Movie in My Pillow/Una película en mi almohada (Children’s Book Press/Lee & Low, 2001), it was only recently that I finally had the chance to read it.

These poems are based on Jorge’s life when he first arrived in the United States after fleeing El Salvador’s civil war almost 40 years ago. We are introduced to young  “Jorgito,” who’s adjusting to his new life in San Francisco with his father. How sad to leave immediate family members, friends, and neighbors behind without saying goodbye, and how much he misses the natural beauty of his homeland! 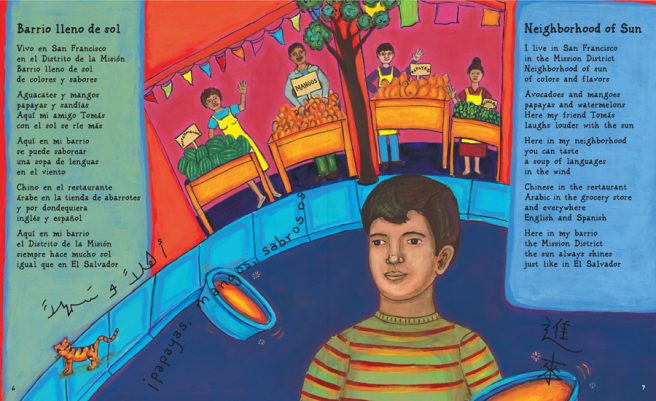 But there is much he finds interesting and exciting in his new urban environment. He describes the Mission District as a “Neighborhood of Sun,” a place of many colors and flavors where a “soup of languages” is spoken. And wonder of all wonders, mangoes come in cans and chicken in plastic bags!

Jorge’s earnest, unassuming voice makes him an accessible and endearing narrator. Young readers will be able to relate to Jorge’s enthusiasm as he rides his purple bike or plays all day long with his yo-yo. But these childhood joys are tempered by a yearning for his Mama’s pupusas (his “most delicious memory of home”), and his Grandma’s stories, which are not only entertaining but spiritually nourishing. What a wonderful surprise to receive a tape recording of her voice “talking and singing to me in Nahuatl and Spanish”!

Jorge’s close relationship with his father is especially touching, as they comfort each other and do fun things together like riding around in Papa’s orange truck and collecting discarded cardboard boxes. And though he misses his best friend Neto, Jorge enjoys his new friend, Tomás, who tells funny stories and has the best laugh.

Birds are a running theme throughout the book. We learn early on that Jorge had to leave his pet parakeet Koki behind in El Salvador, and that his Grandma’s people the Pipiles learned the Nahuatl language from the birds. When Jorge’s Mama and little brothers finally arrive in San Francisco, the family nest is complete. Still, as immigrants straddling two cultures, they will always be “like a band of parakeets flying from San Francisco to El Salvador and back again.”

In his introduction, Jorge says:

I was born in San Salvador, the capital city of El Salvador. My house stood on the edge of the San Jacinto hill. It was a humble house with dirt floors, no running water, and no electricity. When it rained it was beautiful to hear the drops dancing on the tin roof. All around grew fruit trees. Parakeets and other multicolored birds arrived in the mornings to eat and sing . . . Surrounded by all this beauty, I didn’t realize how poor most of us were.

I loved learning more about Jorge’s early life, thinking this is how poets are born. Their inner lives — the movies in their pillows — brimming with memories, dreams, and hopes for the future, provide rich fodder for meaningful and sometimes poignant poems.

A Movie in My Pillow/Una película en mi almohada is an especially good book for these times. As a nation of immigrants, many of us live with dual identities, and that is precisely what makes America culturally and socially rich and strong. It is what made us a beacon of hope for so many others throughout the world. Land of the free, home of the brave. Who are the brave ones now? Those who would leave their beloved countries behind because of war, gang violence, or poverty to face the unknown. Will they reach their destinations? Will they be allowed to seek asylum according to international law? Will their families be torn apart, children detained in cages?

Where some see “criminals” and “invaders,” others see heroes — impoverished human beings seeking survival. Do those who would use the plight of these migrants for political gain possess even one ounce of compassion?

Yesterday October 30, 2018, I had the opportunity to go meet with the second caravan of Salvadoran immigrants, walking toward the USA. we shared cookies, coffee, laughs and the hope all their Dreams will become true.

In addition to his work as an award-winning author, poet, workshop leader, lecturer, and activist, Jorge, with his wife Holly Ayala, publish and sell bilingual children’s books at Luna’s Press and Bookstore in San Francisco. They also organize a yearly poetry festival in both San Francisco and San Salvador. 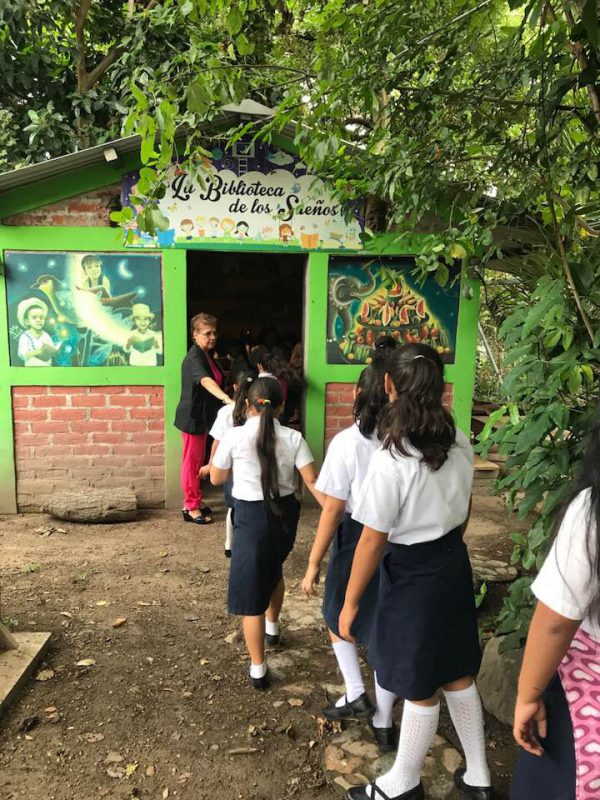 In November 2016, Jorge opened The Library of Dreams/La Biblioteca de los Sueños in San Jacinto, near where he grew up. Located in a brick cabin, its purpose is to promote reading and writing for children living under means and in vulnerable areas. He wanted to provide a safe space for these children to explore their dreams, strengthen their spirits and learn about their culture in a multilingual environment.

Since the area is plagued by gang wars, Jorge rents a bus to transport the children to the library from their schools, even if they’re only a few blocks away.

If we start early . . . it is my belief that when these children are offered to join a violent and harmful lifestyle, they will have the strength of spirit to choose life, education, and multicultural pride.

Whether sharing books with at-risk children in El Salvador, or presenting in classrooms all over the U.S., Jorge remains passionate about promoting literacy and helping kids in immigrant communities develop a positive self image and strong sense of self worth, expanding their imaginations in the belief that they, too, can realize their fondest dreams.

Books like A Movie in My Pillow and We Are Like the Clouds validate and honor the experiences of all those who’ve made similar journeys, while enlightening readers who have not. Today’s children likely hear about migrant caravans, family separations, and border walls frequently on the news. These books are good conversation starters that reference the humanitarian aspect of these issues.

In a 2014 Book Links interview with Sylvia Vardell, Jorge offered these inspiring words about the unique power of poetry:

I would like poetry to be accessible to every child, in this country and in any other country. Poetry is an instrument of peace, among children and adults alike. I believe that poetry should be taught in the schools as a necessary class. Every head of the government should know poetry.

I couldn’t agree more. A poet for President? Yes, please!

Thank you for all you do, Jorge!!

♥️ To learn more about The Library of Dreams/La Biblioteca de los Sueños and to support this project, visit this GoFundMe page.

♥️ Check out the Luna’s Press Books FB Page. You can purchase the two bilingual picture books they’ve published so far, Olita and Manyula: The Big Birthday and Telegrams to Heaven here. I chatted with Jorge about Olita and Manyula  in this post.

Carol is hosting the roundup at Carol’s Corner. Zip over to check out the full menu of poetic goodness being served up in the blogosphere this week. Have a nice weekend!