Fanciful, imaginative, cheery and charming — The Popcorn Astronauts: And Other Biteable Rhymes by Deborah Ruddell and Joan Rankin (Margaret K. McElderry Books, 2015) is precisely my cup of tea. Add mouthwateringly irresistible to the mix and there’s no doubt this exuberant celebration of food has my name written all over it. 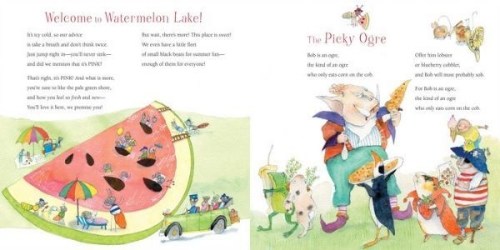 I love Ruddell’s fresh take on perennial kid favorites like watermelon, strawberries, raisins, milk shakes, apples, brownies, mac and cheese, cocoa and birthday cake. Grouped by season, the poems take us from spring’s Strawberry Queen in her elegant red beaded suit, to summer’s cool pinkness at a Watermelon Lake with its “pale green shore” (and little black seed boats!), to a toothsome autumnal stop at the Totally Toast Cafe (4 flavors of marmalade), and finally to marvel at “The World’s Biggest Birthday Cake,” the stuff of your wildest winter dreams. Yum! 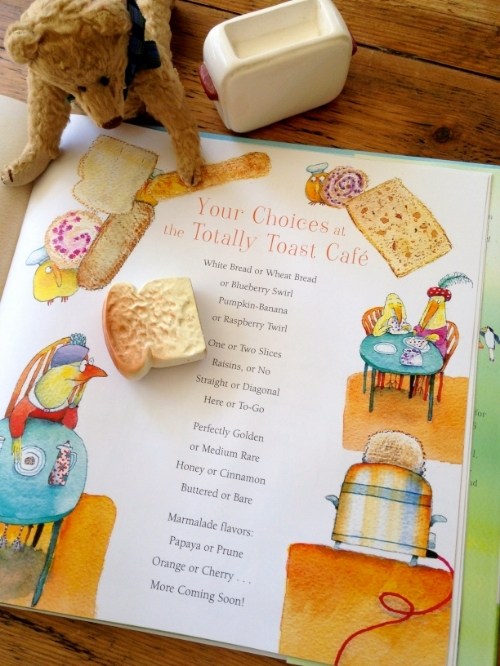 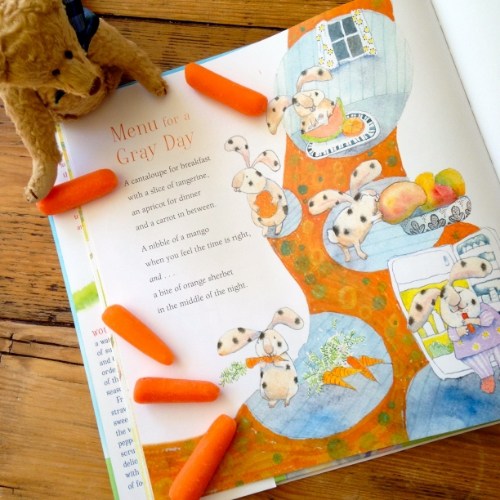 With generous measures of humor, sensory detail, exaggeration, cheekiness, surprise and adventure, Ruddell’s rhyming verses explore mealtime scenarios kids can readily identify with: the yucky appearance but lip smacking tastiness of guacamole, the picky eater (ogre) who’ll only eat one kind of food, the universal love of mac and cheese with its superstar status, eating comfort foods on gray days, lusting after someone else’s dessert, and the all-important dilemma of whether to eat that last brownie (um, yes!). Of course we mustn’t forget the momentous “Arrival of the Popcorn Astronauts,” a prime example of child-like whimsy at its best:

The daring popcorn astronauts
are brave beyond compare —
they scramble into puffy suits
and hurtle through the air.

And when they land, we say hooray
and crowd around the spot
to salt the little astronauts
and eat them while they’re hot.

The jaunty rhythms, various poetic forms and upbeat conversational tone keep this inspired smorgasbord from ever feeling predictable or clichéd, making it easy to get caught up in all the fun and enchantment.

Joan Rankin’s quirky watercolors define, extend, and enhance the deliciousness to the max. She depicts a world where humans and animals happily co-exist and her use of comic detail is brilliant. How much do I love her cupcake tree, personified peaches (which Ruddell so cleverly described as having “flannelpajamaty skin”), the all-too-inviting red-tented Cocoa Cabana, and the utterly genius Shakespearean drive-through?

Readers will love spotting and identifying the animal characters and the different foods they’re eating, carrying, or serving (suave penguins!). Every nuance of emotion is captured via pitch-perfect facial expressions and body language. I am particularly enamored with the “Recipe for Raisins” illo (those grapes drying on a clothes line are just too adorable). Ruddell and Rankin make a splendid team, perfectly in sync bite for bite. A culinary coup!

Love those popcorn astronauts. How did you come up with the idea for them? Did this collection start with that poem?

The popcorn astronauts idea had its genesis when my son was a little boy. We were waiting for our popcorn to pop, listening to the first thrilling stirrings of the popcorn. Ben said, “They’re getting into their popcorn suits.” That image stuck with me for years and years, then resurfaced when I first started writing poems. The “popcorn suits” became space suits for flying popcorn, and voila! … The Popcorn Astronauts!

“The Popcorn Astronauts” and “A Recipe for Raisins” were two very early poems that languished in my files for years, along with lots and lots of poems that I threw away. But these two seemed to keep calling to me, suggesting that I might be able to start a collection.

NO poem is ever easy for me to write. I am a slow and tormented poet! The hardest part is when I think I’ve almost got something, but it’s just out of reach. That happened with “Welcome to Watermelon Lake.” I had the image of the pink lake and the pale green shore, but making that image work as a poem was a struggle. Just when I thought I finally had it made, my editor suggested a third stanza in which I introduce the seeds! Argh!

You have such a wonderful sense of humor with a dash of finely tuned whimsy thrown in. Who were some of your early influences? Who or what inspires your writing now?

My early influences were my parents and the favorite books that were read to me and my twin sister as children. My mom was a musician/piano teacher who gave me a love of music. My dad loved words and had a wry sense of humor. He would recite poems (Casey at the Bat, Hiawatha, etc.) at the dinner table and as an accompaniment to our rope jumping.

Both of our parents read to us, and I can trace who I am as a writer straight back to some of those early memories. One of our favorite books was The Giant Golden Books Treasury of Elves and Fairies, illustrated by Garth Williams. In this book, the imaginary became real to me. There was a story called “The Cannery Bear” about a hungry bear in overalls who works in a salmon cannery. The story included a little pink bear with wings! And so, I became a writer who thinks nothing of turning popcorn into astronauts.

The other book that was dear to our hearts was Pantaloon, by Kathryn Jackson, illustrated by Leonard Weisgard. Pantaloon is a poodle with a sweet tooth who applies for a job as a baker’s helper. Robin and I pored over those mouthwatering illustrations for hours, especially an enormous, rose covered, pink and white cake. The food images captivated us like nothing else! 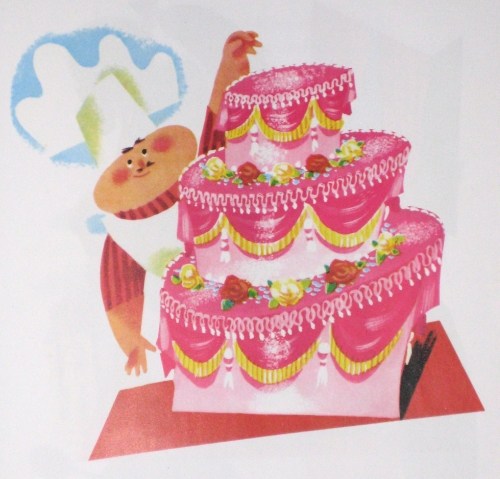 What inspires my writing now? Karla Kuskin was one of my first inspirations, and there are many, many more. If I had to choose one poet whose work is a North Star for me, it would be Alice Schertle. She can be witty or wise or both at the same time. I love that.

What were some of your favorite foods when you were little? Were you a picky eater?

My favorite foods when I was little? I think I was pretty picky, because I have memories of trying to hide food that I didn’t like (asparagus!) and I was a beanpole. I do remember loving my mom’s creation of a bunny salad from a canned pear half with a cottage cheese tail and raisin eyes (though I hated raisins, and still do). Mom was a great baker of pies, and lemon meringue was my favorite.

This is your third collaboration with Joan Rankin. What do you like most about the work she did for this project? Were there any special little touches that especially delighted or surprised you?

Joan Rankin always surprises and delights me, and this book is no exception. My two favorite spreads are “The Cocoa Cabana” with its endearing skating fox, and “How a Poet Orders a Shake” with its Shakespearean drive-thru window and the poet on horseback. But I truly love the whole book! 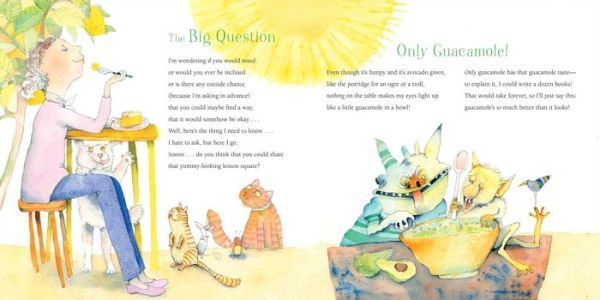 I’m wondering if you would mind
or would you ever be inclined
or is there any outside chance
(because I’m asking in advance)
that you could maybe find a way,
that it would somehow be okay . . .
Well, here’s the thing I need to know . . .
I hate to ask, but here I go:
Soooo . . . do you think that you could share
that yummy-looking lemon square?

Even though it’s lumpy and it’s avocado green,
like the porridge for an ogre or a troll,
nothing on the table makes my eyes light up
like a little guacamole in a bowl!

Only guacamole has that guacamole taste —
to explain it, I could write a dozen books!
That would take forever, so I’ll just say this:
guacamole’s so much better than it looks!

This smoothie’s a doozie —
you’re quite a gourmet!
Your brilliant concoction
just blows me away!

That eye-catching color
of yellowish-brown,
those delicate flavors,
so hard to pin down . . .

A whisper of pickle
is what I detect,
with glimmers of turnip
I didn’t expect!

A dusty old beehive?
A handful of hail?
Unless I’m mistaken,
the slime from a snail.

The mud puddle splashes
are really delish,
and the finishing touch
is that nubbin of fish! 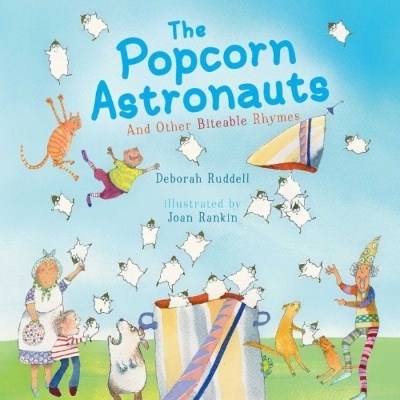 Laura Purdie Salas is hosting the Roundup today at Writing the World for Kids. Take her some freshly popped popcorn and enjoy the full menu of poetic treats being shared in the blogosphere this week. Hope you’re having a terrific Poetry Month so far!

42 thoughts on “friday feast: Chatting with Author Deborah Ruddell about The Popcorn Astronauts”