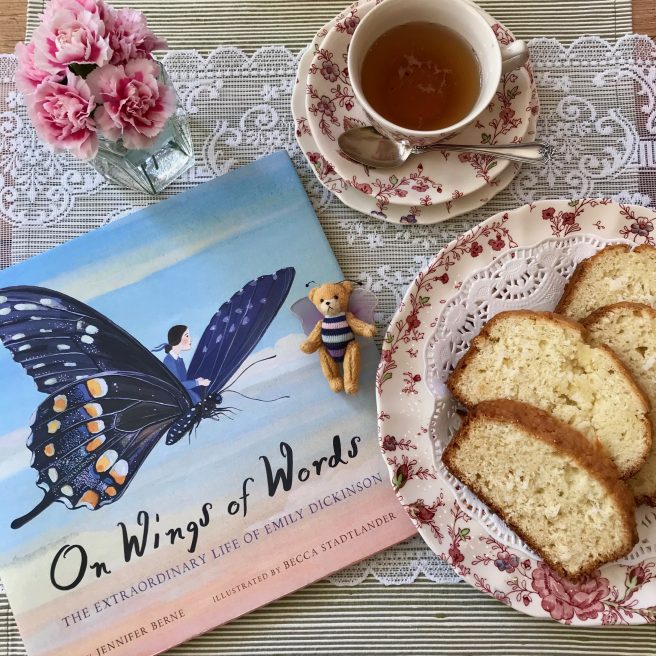 Each bird, bee, blossom, butterfly — was a source of joy and wonder for young Emily Dickinson. In this beautiful new picture book biography, aptly illustrated with a butterfly motif, we witness her singular metamorphosis from a keenly observant child into one of the most original and innovative poets in American literature.

On Wings of Words: The Extraordinary Life of Emily Dickinson by Jennifer Berne and Becca Stadtlander (Chronicle Books, 2020), traces Dickinson’s life from her birth on a snowy December evening in 1830 until her death in May 1886, with a unique focus on how her writing liberated, challenged, and sustained her, and why she eventually chose a life of solitude in order to be her truest self.

Berne’s lyrical narrative is artfully interwoven with Emily’s own words, creating an intimate sense of immediacy as we become privy to the poet’s “letter to the World.”

We first see how young Emily “met the world,” exploring her natural surroundings with great curiosity and affection. Nothing was too small or insignificant to warrant her full attention, and she “found new words for everything she was discovering.”

The bee is not afraid of me,
I know the butterfly . . .
The brooks laugh louder
when I come.

Emily loved so many things — her brother Austin, her school friends, and most of all, books, for each “was an adventure, a distant journey on a sea of words.” From early on, she was intense and passionate, with strong desires, deep thoughts, and heightened emotional highs and lows.

She was certainly no stranger to sorrow, the sorrow of loss and events that frightened her and “flooded her mind with questions.”

Though Emily sought answers at home, at church, and at school — none could be found. She was told to merely accept and “obey without asking,/to believe without knowing why.”

That is when she turned inward, and “put her faith in what she could see and understand.” Guided and bolstered by her own brand of hope, “she sought her truth” and began to write.

The robins, bumblebees, and daisies she
loved — the dark diseases and frightening
deaths — the unknowable God and
mysterious heaven — all came
pouring out, as poems.

And writing these poems empowered her, lifted her spirits, and gave her newfound strength as her imagination took flight. She could now travel anywhere in her mind, and become anything she chose — “a bird, a worm, a ghost, a god,/A beggar, a king, a somebody, a nobody.” 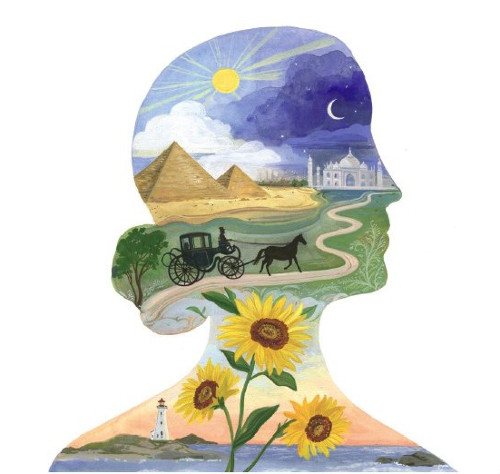 She soon realized that “the inner world was/bigger than all the world outside.”

As her inner world steadily expanded, she became more reclusive. Save for her family, a few good friends, her dog Carlo and children, Emily rarely saw anyone. She did not need to. She wasn’t interested in conforming to others’ expectations. She had come into her own as a poet, and for the rest of her life, fully devoted herself to this important work, vigorously exploring her self-sustaining domain of ideas, emotions, and possibilities.

After Emily’s death, her younger sister Lavinia discovered a large cache of her poems, “Poems that — on the wings of Emily’s words — flew out and away — into the future and around the world.”

Her pictures range from the evocative opening spread showing the Dickinson Homestead draped in moonlit snow, to the fanciful image of Emily flying around the countryside atop a grasshopper with a bevy of butterflies, to a tiny Emily hiding inside a pink flower. This blend of realism and fantasy mirrors Emily’s sensibility, emotional innerscape and intellectual acumen.

In her Artist’s Note, Stadtlander says she saw butterflies as a major theme throughout the book, as they represented “Emily’s relationship to nature and the beauty of her work.” As they flutter through the pages, these butterflies also underscore the theme of one girl’s extraordinary transformation, as she sought to soar above and beyond the usual constraints of life in her time.

I love the close-up of a large butterfly perched on Emily’s fingertip (as she resolved to seek for herself the answers she craved), the gorgeous image of white dress Emily with a giant pair of blue wings walking in the clouds, and the gorgeous flurry of butterflies representing Emily’s poems that “flew out and away — into the future and around the world” — after Lavinia released them.

Other winged creatures — birds and a dragonfly — take to the sky, reminding us of Emily’s journey towards self actualization, whether between the pages of a book, or into the depths of her soul.

On Wings of Words beautifully captures Emily’s essence, and helps to demystify her reputation as that strange, enigmatic woman in white who was preoccupied with death. It’s a good way for young readers to meet Emily; no doubt they’ll be able to relate to her open-hearted embrace of every small miracle, her ongoing communion with the natural world, and perhaps see why she was inspired to write about her discoveries. They can better understand the path she chose for herself and even applaud her originality and nonconformity. 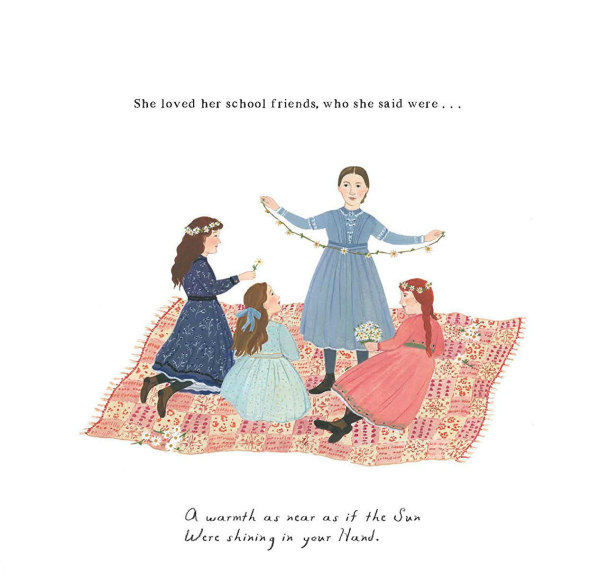 Young readers may also find it interesting, in this time of self-isolation, that a person who eschewed society at large was able to speak for and to so many. From her chosen social distance, she knew better than most what was in people’s hearts, pondered life’s big questions (immortality, love, divinity), and ultimately brought such delight, surprise, and enlightenment through her singular way of seeing things. I am always amazed at how Dickinson was able to encase profound universal truths in such short poems.

Perhaps it all comes down to being quiet and alone, to have adequate time to reflect and pay closer attention to what is around us. Rather than complaining about being confined as some are doing now, Dickinson instead coveted her time at home — she wasn’t locked in, she was set free. If she had been preoccupied with 19th century social soirees, she might not have noted that “certain Slant of light/Winter Afternoons,” or how “things are budding, and springing, and singing.”

Wonderful back matter includes an Author’s Note, Artist’s Note, and discussion About Emily’s Poetry, and Discovering the World of Poetry. This book has received four well deserved **starred reviews** and is a treasure for Dickinson fans of all ages. 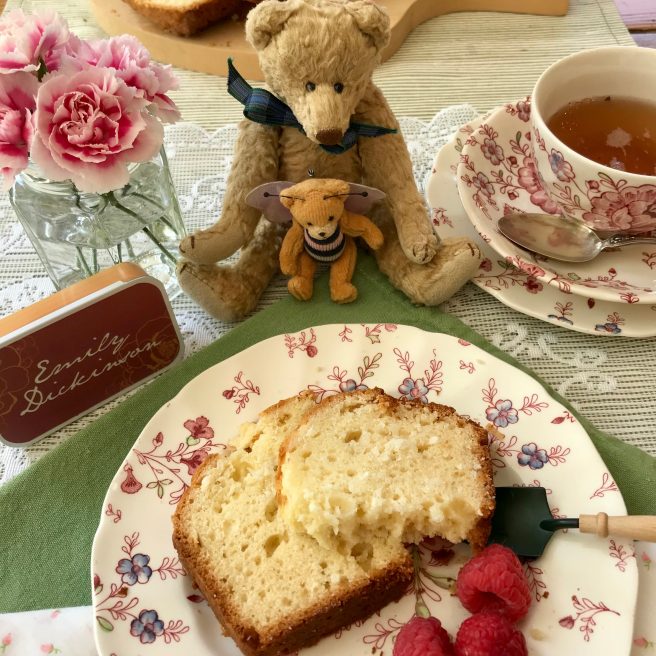 If you’re an avid Emily fan, you probably know that she was a good baker and often sent homemade treats with poems or notes and flowers to family and friends. She was probably more widely known in Amherst for her prize-winning Rye and Indian bread (or for her gardening) than she was for her literary talents. Of course her practice of lowering baskets of gingerbread from her bedroom window to the neighborhood children is legendary.

In addition to everyday breads and gingerbread, Emily enjoyed making puddings, cakes and candies. Since fresh coconuts were readily available in 19th century New England, it’s no surprise they were commonly used in sweets.

Currently, there are two Coconut Cake recipes associated with Dickinson. The first is included in a Dickinson Museum pamphlet entitled, Emily Dickinson: Profile of the Poet as Cook (1976), and is from Dickinson neighbor Mrs. Carmichael. Emily’s poem, “The Things that never can come back, are several –” appears on the back of the recipe in her handwriting.

The other recipe is part of a privately owned manuscript collection (exhibited for the first time at Poets House back in 2011). Interesting that Emily spelled Coconut as “Cocoanut,” and it’s fun to look at her curlicue “c’s,” as well as the amount of space between each letter and word (my amateur graphology sleuthing reveals that this is a person who’s more of a loner, who likes a fair amount of distance from others). (Note: “half a rule” = half a cake.)

After reading through both recipes, it was obvious that the second would be the more practical choice, since it called for half the amount of sugar and only 2 eggs instead of 6. Though the second handwritten recipe didn’t include any instructions, it was easy enough to figure out (I also found some helpful tips at blogs such as Tori Avey and Revolutionary Pie). 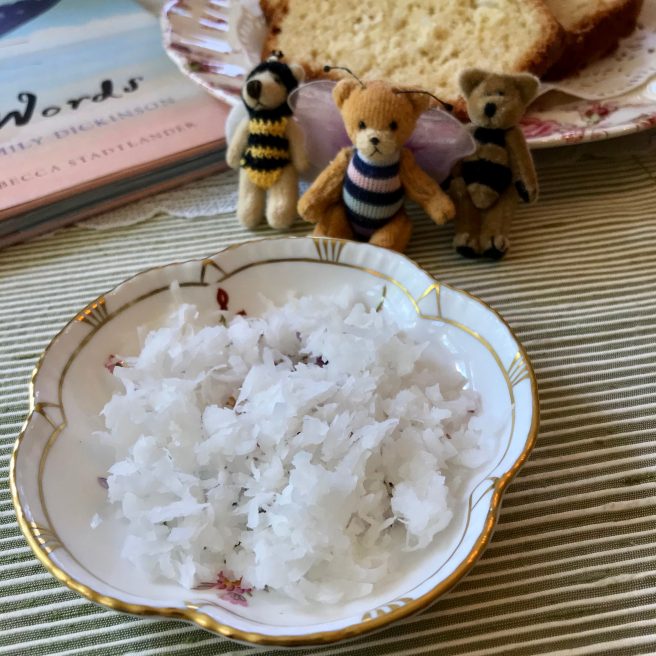 It was widely noted that this was more of a pound cake than a light and airy cake, and that it wasn’t very sweet (as is common with historic recipes). So I followed wise advice and used cake flour instead of all-purpose flour, and sweetened coconut flakes instead of plain dried coconut. Happy to say it turned out nicely. I rarely use sweetened coconut because it’s usually too sweet, but in this case, it added just the right touch of sweetness. 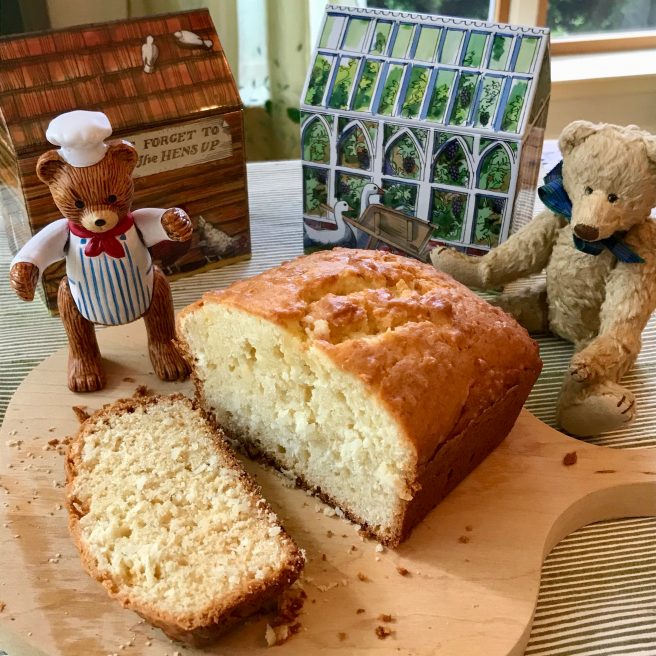 Whenever I make an Emily recipe, I love picturing her in the kitchen, scribbling poetic fragments on miscellaneous scraps of paper. Since food preparation likely dominated her daily schedule, she was wise to record those brilliant flashes of inspiration whenever she had a spare moment.

I give her extra chops for shelling and grating the coconuts — time consuming hard work. But it’s nice to imagine that while her hands were busy with tedious tasks, her mind was brimming with ideas, images, and impressions. 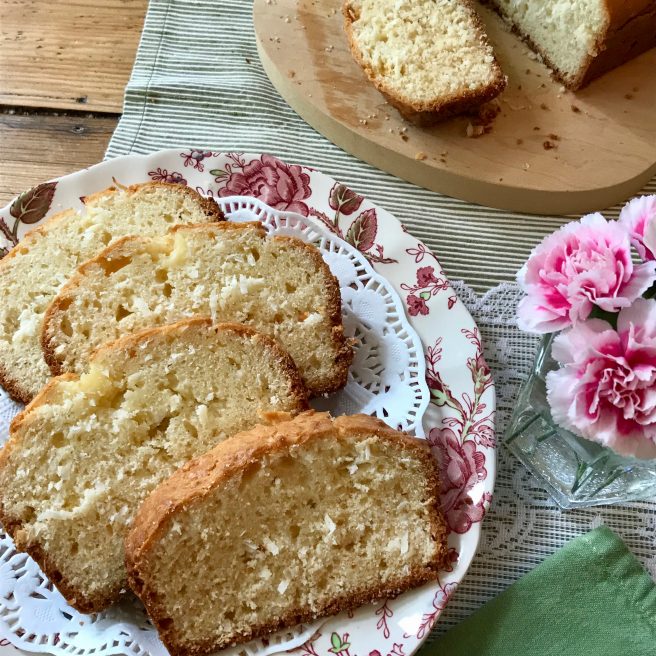 Like her Rice Cake (which we made previously), this Coconut Cake is perfect for teatime. Nibble on a slice while reading On Wings of Words and this fine poem: 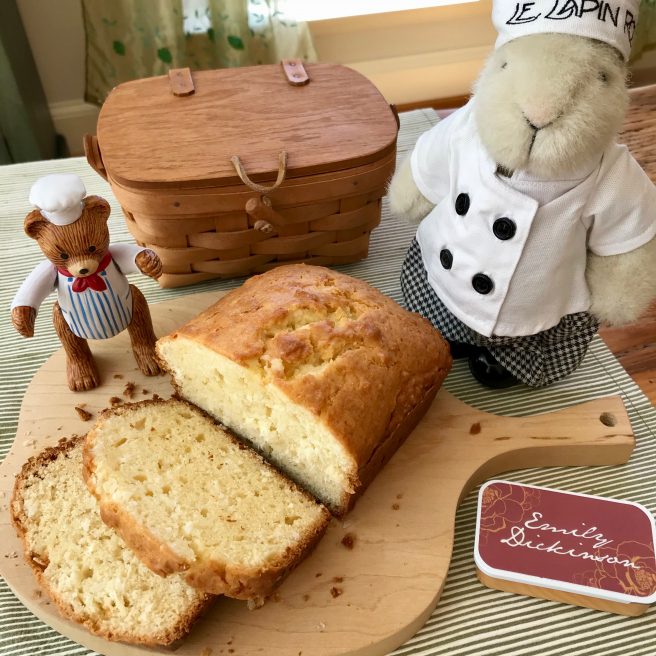 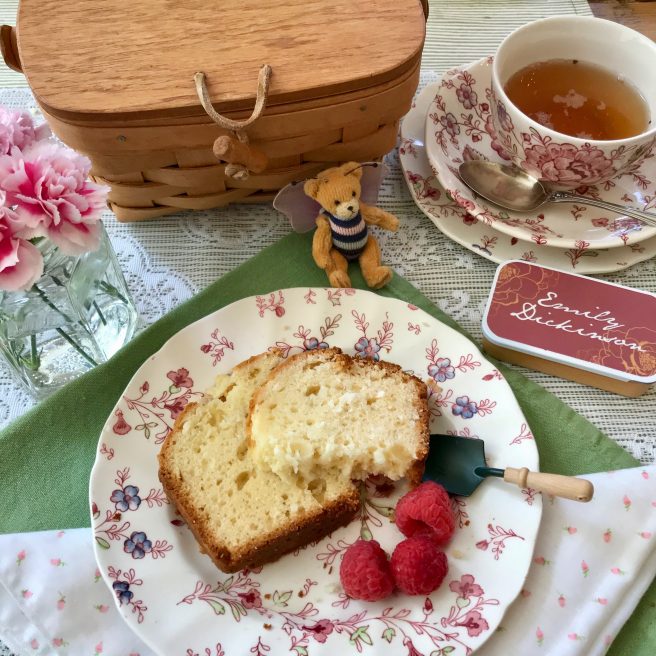 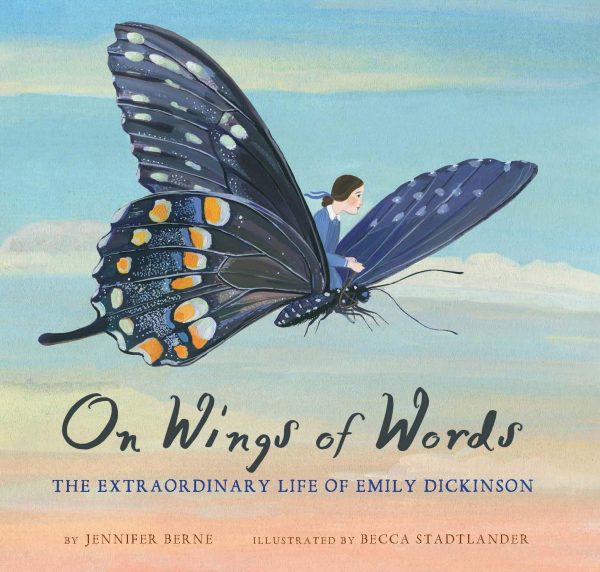 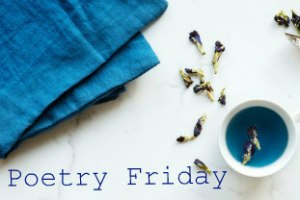 The lovely and talented Elizabeth Steinglass is hosting the Roundup this week. Wing your way over to check out the full menu of poetic goodness being served up around the blogosphere. Stay safe, be well, and enjoy your weekend!